My favourite place travelling in a wheelchair – Sapa.

Published by Hotwheels on 16th April 2016 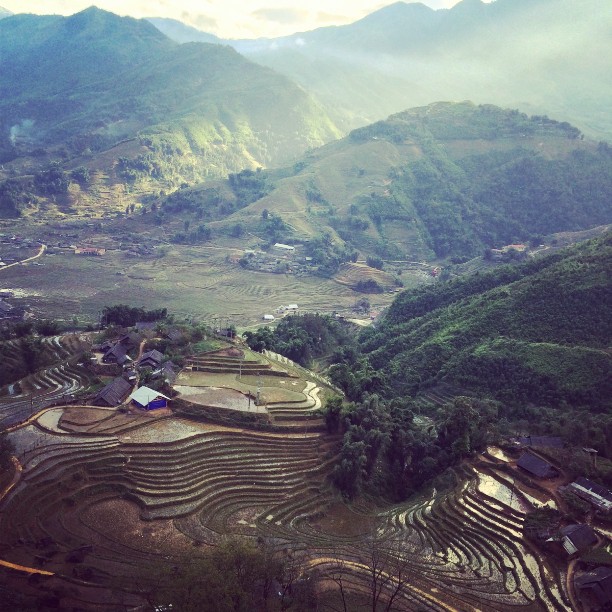 I’m going to work backwards (ish) through Vietnam, much in the same way I like to read a magazine. This is because although many of the places we visited in Vietnam were amazing, nothing compares to Sapa.

Sapa is on the northern border of Vietnam, so close to China that when you go on the bus through Lao Cai (where the Hanoi-Sapa night train goes to) you can wave to it. The immediately noticeable thing about this part of our travels, after 2 ½ months in a T-shirt, was how freezing it was there. Everyone is dressed in trekking clothes and hats and we were not at all prepared. It was at this point that I discovered just how much damage eating a mainly oil based diet had done to my waistline as I tried to crowbar my chub in to my jeans.

The pre-cursing story to Sapa was a visit to Ha Long Bay, which I will cover in a separate post. It’s safe to say that despite a lovely overnight train (with my wheelchair tetrised in the cabin as usual) to Lao Cai, and another hour’s minibus ride we arrived in Sapa at 5.30am freezing, grumpy, exhausted and with no prospect of a bed or warmth until 1pm. We were then faced with the mother of all hills to get up to our hostel, in this respect Sapa is not so disabled friendly. At this point we did the only thing left to do, found a spot of bright sunlight and fell asleep on the pavement for a few hours. I was woken to Steph chatting away to a local lady dressed in full Hmong attire. Being a popular tourist location the local tribeswomen are somewhat pushy with their handicrafts, but also extremely friendly.

What followed was a couple of really shit days. The combination of exhaustion and being away for so long, relying on Steph for everything, and out of control anxiety from watching my self confidence to do anything independently shrink (despite what people thought they were seeing from the outside) left me spending two days in a duvet cave. I lay in bed, I cried, I watched Friends, I refused to get out of bed and I contemplated going home. But I decided I had to prove to myself I could do it, I could stick with it. Thanks to a phone call from one of my best friends, who was able to talk me out of bed to go and get a hostel cheese toastie ‘one little toe at a time’ over the space of three hours, I decided to put the shit days behind me and try and enjoy myself again. 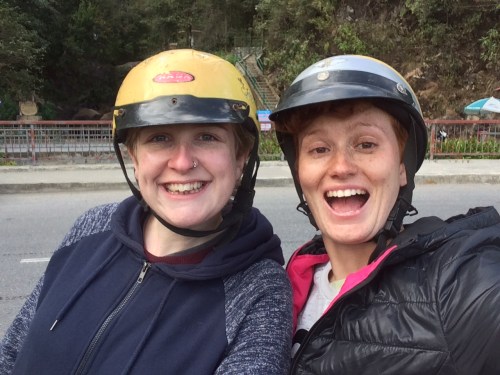 The next day Steph and I got up in search of someone on motorbikes who could take us to the local sights. Motorbike renting here is crazy, there don’t appear to be official shops and no one asks you for more that £5 to take the bike. I would highly recommend that anyone who is contemplating going to Asia get a few moped lessons before they leave. Renting one is a great way to get around and see everything but there’s no health and safety here and it’s just not worth being one of those many tourists that ends up hurting themselves. If you’re disabled, it’s a different story again and when you get to my Koh Lanta post you’ll see why people with mobility issues possibly shouldn’t ride mopeds at all. So anyway, after a little hanging around and some phone calls, two men on big motorbikes turn up to take us up to the waterfall and down to one of the rice growing villages. I really can’t remember how much we paid but it didn’t work out as hugely expensive and two extremely safe riders took us to all the best places. Unfortunately mid way through the afternoon I did start to feel like I was going to have… problems, and there’s really no better way to liven up a motorbike ride than feeling like you’re going to shit yourself on it. Sapa is absolutely beautiful. I can’t begin to convey with my words or my pictures the ethereal beauty of this place. Water pools in each of the tiered rice fields that meander up and down the hills. Green peaks glimpse out above your head and mist cloaks the villages. The air is damp and fresh and weirdly the main town has a feel of an Austrian skiing village. Women from the local tribes wander through the town selling handicrafts and men in scruffy trainers and puffa jackets zip through on motorbikes. 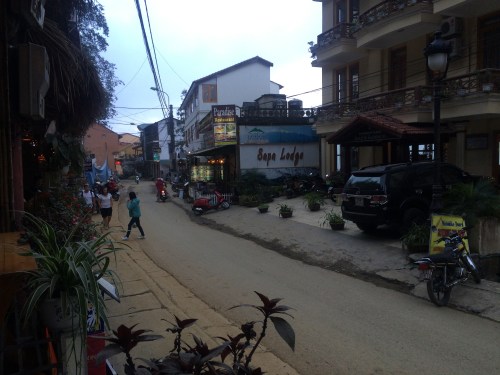 That evening we ended up at an almost entirely empty shisa bar, where I successfully learnt to blow smoke rings (highlight of the trip amirite?). We had spent most of the evening talking to the wonderful owner and playing with her baby (who loved Steph and hated me… of course) when two girls our age (or am I a woman?) came in to play pool. I joked that we should ask them to teach us to play and they had the same thought that we should play doubles with them. Of course they didn’t know that the pair of us probably couldn’t have found the right end of the stick without direction.

It turns out that the women, Tram and her cousin, were originally from one of the neighbouring tribes (Red Dzao not Hmong) and after leaving their families to join the relatively modern life of Sapa now both worked as tourguides and homestay hosts. We had been meaning to arrange a homestay whilst there (this and trekking being the two main things to do in Sapa) but due to my duvet caving we were on our last night and had missed our chance. Luckily for us though Tram agreed to be our tourguide the next day and turned up at our hostel in her traditional clothes, the rebellious pink hair streaks her mother was yet to notice tucked away under her red head scarf.

Tram took us to her family’s house, where they had cooked us a meal I will never forget. At some point we had clearly mentioned we were vegetarian and waiting for us were simple but delicious dishes with vegetables that actually tasted like…. Vegetables! I think the majority of British people my age, who buy their imported veg from the supermarket, don’t have a clue what vegetables are actually supposed to taste like. When they’re grown in the off season rice fields, and fertilized by the pig that will later become dinner, then cooked in a large fire in the centre of an open plan barn style house… they’re incredible!

We then went on to the village bathhouse, which involves sitting in a large wooden tub of nearly boiling black herbal water that smelt a bit like vegetable soup. At one point we did wonder if we were just being stewed for later but it was the most fun and relaxing, if slightly lobstering, experience. One of my favourite pictures from my childhood is one of me sitting in a bucket of water at my grandparent’s house. As I sat in this equally proportioned to my adult-self bucket I couldn’t help but chuckle to myself that I probably haven’t grown up at all! 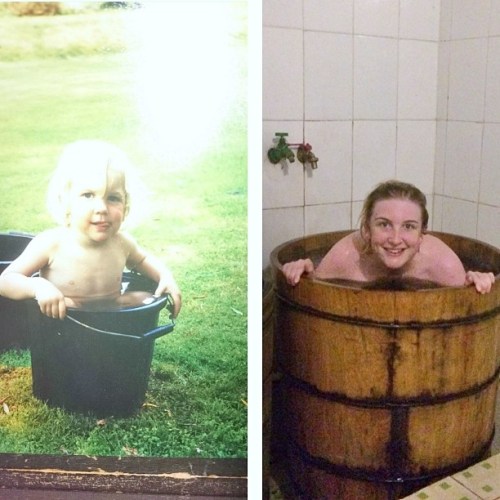 On our way back to Sapa Tram turns round to us and tells us she’s going to come with us on the hour bus ride back to Lao Cai to help us with our bags and get on the train. At the bus stop we bump into Thanh, the owner of the shisa bar, taking her baby for a walk and I sort of wished I could stay there forever! I’ve never met such genuinely lovely, warm and welcoming people and if the beauty of the landscape isn’t enough, the beauty of the people complete it.

Unfortunately I don’t have many photos of this part of the trip because my camera had to be left in Hanoi after it got broken in Ha Long Bay.