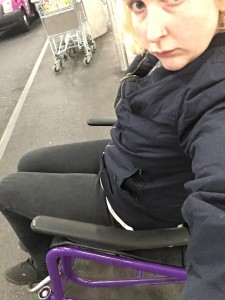 I’m just so furious that it’s so hard for disabled people to go out and access the world around them and no one seems to care very much. If anything government cuts are making it worse. This is bigger than just me and it’s more widespread than just flying. Just today people were protesting at eight rail stations the government is planning to cut access to (TFA), only 1/4 of tube stations are accessible, and only half of them fully accessible to the train and not just the platform (TFA), and wheelchair users often have to fight with pram users for their right to ride (BBC). We are not doing enough to make sure that people with disabilities can participate in life equally. Being able to go out should be a right not a luxury.

What am I doing this evening?

Sitting alone in my flat worrying about how I’m going to access the world. What am I potentially going to be doing for the next couple of months? The same thing (updates below). This should have been a post about my exciting holiday to Cuba but instead it’s a story about how Air Canada lost my wheelchair some time between Cuba and Toronto. This isn’t me looking for, or even remotely wanting sympathy. This is about me being absolutely furious that anyone could be so careless as to lose a wheelchair, and then not seem to think it a massive priority to find it and get it back to me.

Two days after I discovered it was missing it’s still playing the best game of hide and seek you’ve ever seen because despite Air Canada’s ‘priority tracing team’ apparently looking high and low for it, it has neither turned up at the six gate Varadero airport, or apparently on any other plane.

Things started off badly when the check in crew at Varadero insisted it couldn’t go through security and made me check it with my luggage with one sad little ‘gate’ luggage tag on it. Whilst the evening staff in Toronto at the start of my layover initially seemed angry on my behalf and keen to actively find the chair, by the time the morning staff at the end of my layover had taken over they knew nothing of the case and since then the message has been that when it turns up I’ll be contacted. Sometimes a few condolences and apologies have been thrown my way but nothing like the urgency you would expect someone to show considering they have LOST MY LEGS.

It’s not just going to magically appear by punching my code in to the computer again, GO AND LOOK FOR IT WITH YOUR EYES. The longer that process took the higher the chance the wheelchair would end up somewhere it really won’t be found and yet I was passed from desk agent to phone agent to external company several times whilst being told the same thing…’when it turns up’.

I’ve been offered a temporary chair now – although was refused either a loan chair or a taxi to get me home from Heathrow and told to ‘keep receipts’ if I wanted to pay for my own. Even my previous, now ‘spare’, chair is not appropriate to my needs and nothing they can provide me with will be better. The distances I am able to push in it mean I will not be able to go out alone and I’m already thinking about whether I need to get care in place whilst my girlfriend has spoken to her boss about potential work from home options to help me out. Whilst it does appear that if my chair officially gets declared missing the airline will pay for it, I expect a new wheelchair to take around eight weeks to make and then it has to be shipped from the US. Plus any cost over £2000 has to be approved by the airline so I anticipate a battle there.

This is a custom built wheelchair designed to give me the best chance of living an independent life, it cannot just be replace like a suitcase and some pants. I’ve shown through this blog that disability should not be a barrier to travel but stuff like this shows just how far we have to go to make travel accessible before you’ve done anything more than booked your ticket.

Air Canada also trashed two out of three of our suitcases, they replaced my brother’s one with one that broke as soon as he got it home and will only replace my purple, four wheeled hard case part of a set suitcase with and extender zip for a black, four wheeled suitcase with no extender zip, of a similar size because apparently this counts as ‘like for like’. This gives me little hope they will have taken proper care of my wheelchair.

It’s absolutely disgraceful that a wheelchair could ever be lost on a flight, and appalling that the second the error was discovered someone wasn’t frantically running around the halls of Varadero airport completing a search and rescue mission.

On Tuesday the airline called to ask if I had my wheelchair back – like they actually didn’t know this information. When I first received the call I got so excited that I then spent the rest of the day angry and depressed.

On Wednesday they located my wheelchair but have been unable to give me any kind of ETA for its arrival.

Despite using their Twitter to get hold of them twice every day I have received nothing but ‘we don’t have any more information but we’ll let you know when we do’ since then.

On Friday the external company handling the possibly replacement of my wheelchair emailed me to ask if I had the chair back. Here are the emails:

I am following you up today to confirm you received your Ti-Lite chair from Air Canada.

No, I have had nothing more than ‘we’ll let you know when we have more information’ for days now…

Have you been told it’s being delivered today?

No but they wanted to have it completed by end of week.

Leave it with me, Amy.  I will contact them for you.

My corporate contact at Air Canada has requested Veradero to call her to confirm that they sent the chair.

I am waiting to hear.

Ok thank you, can you please make a request that they call me to arrange delivery and not just turn up please?

Of course, but let’s make sure they have the chair.

This email exchange doesn’t exactly fill me with confidence that it’s been sent to me…or even found.

The found wheelchair was not even mine, it was SOMEONE ELSE’S! They have actually been careless enough to lose two wheelchairs on the same day. TWO.